Protecting St. Louis from Termites Since 1954

*Valid on First Service Agreement
Call Pure Pest today — we will get rid of your termite infestation with safe and minimal use of chemicals.
Call us today at 314-222-PEST!

Termites can pose a major threat to residential and commercial property in St. Louis. Our termite control experts can help!

Termites play an important role in the ecosystem by breaking down various plant materials, including dead wood. This is one of many examples of the way that creatures great and small protect nature’s balance. From a scientific and ecological perspective, it’s fascinating to discover that there are more than 2,600 known species of termites worldwide taking on the important work of disposing of unneeded plant matter; nearly 50 of those species are found in North America. However, while we tip our hats to termites and their important role in maintaining various natural habitats, when termites invade YOUR habitat — be it a residential or a commercial property, they quickly go from scientific wonder to major threat!

How major? Each year, termites cost $5 billion in damages in the United States, and billions are spent in termite prevention and treatment. According to some estimates, an average home suffers approximately $7,900 in damages before an infestation is detected, and what makes matters worse is that this damage might not be covered by homeowner’s insurance. When it comes to causing stress and financial strain, the tiny termite definitely punches above its weight! 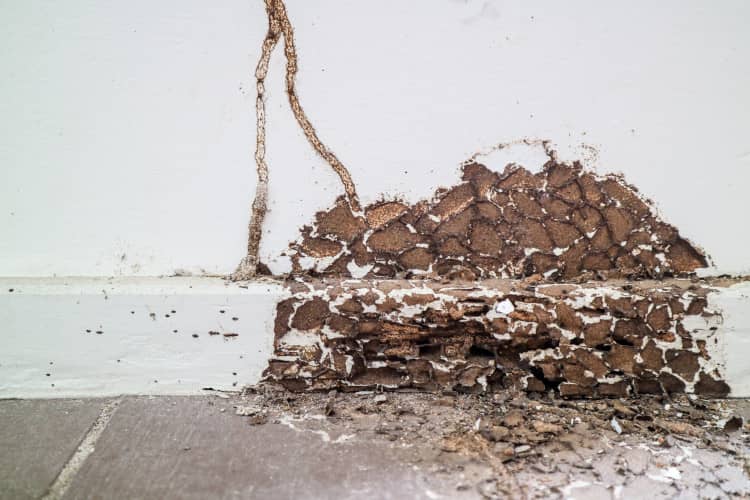 “I was so thankful!”

I have used Pure Pest company at my last house to rid termites that I thought were isolated to the exterior rail ties around my planter. To my surprise, Jake R informed me that I had tunnels inside my garage full of termites that had been eating away at the studs in my walls behind the drywall! If it was not for Jake being so proficient in his line of work, who knows how much more damage could have been done! I was so thankful for his attention to detail that when I purchased my new home I had him come out to do a treatment for spiders before we moved in and set up the annual treatment program that they offer. While there he once again went above and beyond informing me of things to look for, areas to seal up, and even checked for signs of mice and other rodents. I’m a customer for life! I have only had Jake come to my properties but I’m sure everyone in this company holds the same high standards.
– Richard T. 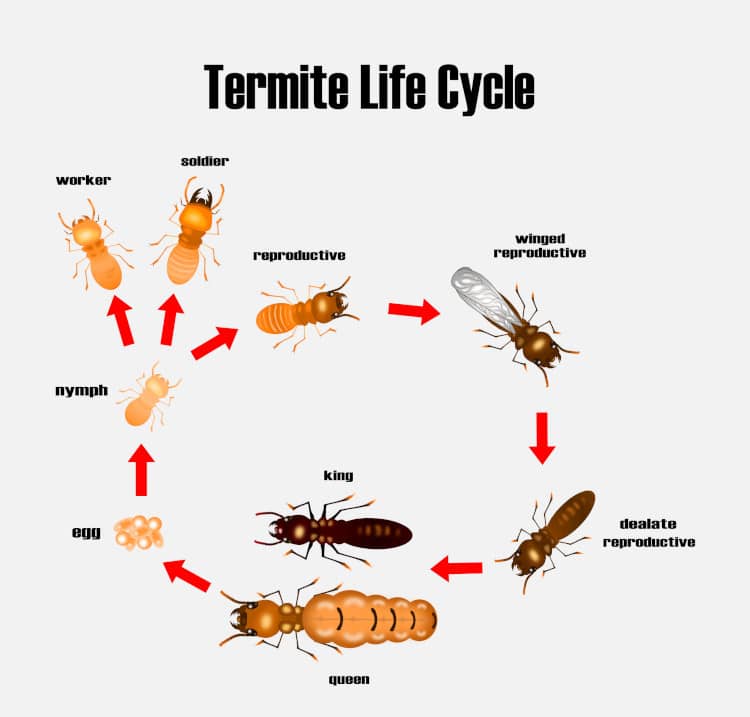 Fortunately, you can protect yourself from having to deal with all this trouble and expense by catching the infestation early and calling us right away if you suspect there might be a problem. If you notice signs that indicate you could be dealing with a termite swarm on or near your property, we recommend you get your home inspected immediately! It may not be obvious; one of the biggest problems with termites is that you normally don’t notice them or the damage they’re causing until it’s too late to prevent it from becoming a problem.

They are extremely well organized pests, and can find a way inside any building.

How to Tell if You Need a Termite Inspection

So, what are some signs you can look for to help you know it’s time to call Pure Pest? Keep an eye out for any of the following signs:

Termite droppings resemble coffee grounds or sawdust and are hexagonal in shape. The color is wood-like.

When termites cause damage to wood, it appears as a honeycomb interior.

These mud tubes extend over support piers, floor joists, or walls, and are used for termites to travel from underground colonies to their feeding grounds.

Swarmers are present around firewood, mulch, and stumps. They are found near light sources. While it is not a sign of active infestation, it is a warning signal of impending infestation.

Termites grow to about the size of an ant or about three-eighths of an inch long. They like to be around all sorts of wood, whether it’s the trees growing in your garden, or the lumber that was used to construct your home. Generally, termites build their nests around moisture in walls and underground. 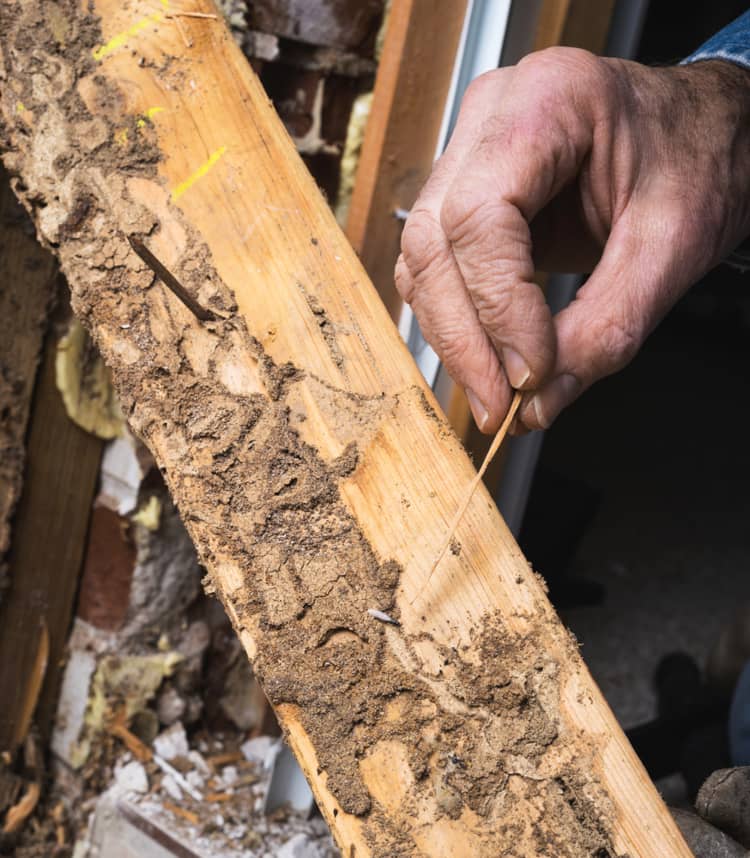 Most subterranean colonies consist of around several hundred thousand termites, though the number can vary based on how mature the colony is. The notable exception to this rule is Formosan termite, also known as Coptotermes formosanus or more colloquially as the “super-termite”. A single colony of these super-termites might consist of several million members! Formosan termites are the most aggressive and destructive species both because of the large size of their colonies, and because they are willing to stray further from their nests in search of food: while most species of termites tend to stay within a 100 foot radius of their nest, the Formosan termite has a range of up to 300 feet! They are hungry buggers: a mature colony can devour up to 13 ounces of wood a day. Formosan termites do not limit their diets to wood, they have also been known to chew through asphalt, foam insulation boards, thin lead and/or copper sheeting, plaster, and some even some types of plastic! They are creamy and translucent in color and often mistaken for flying ants.

Whether you’re dealing with an infestation of several hundred thousand subterranean termites, or the several million members of a colony of the dreaded Formosan termite, it might be hard to imagine that such a large population of invaders could go unnoticed. Nevertheless, the reality is that even if you’re on the lookout, these pests can remain hidden because they create mud tunnels and burrow underground. Pure Pest are experts in spotting the signs of termite infestations, and can get rid of any nests in and around your home, including the ones built underground.

We’re always thrilled when we’re able to help clients throughout our St. Louis, Missouri, service area prevent an infestation before it leads to expensive damages to their home, and all the stress that goes with that! 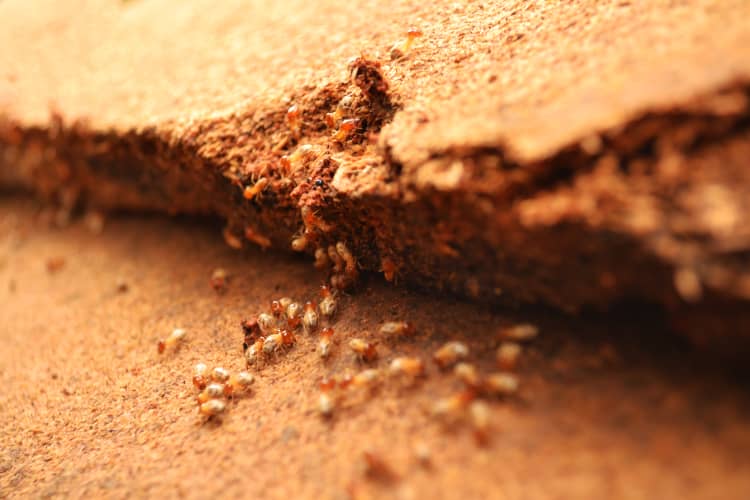 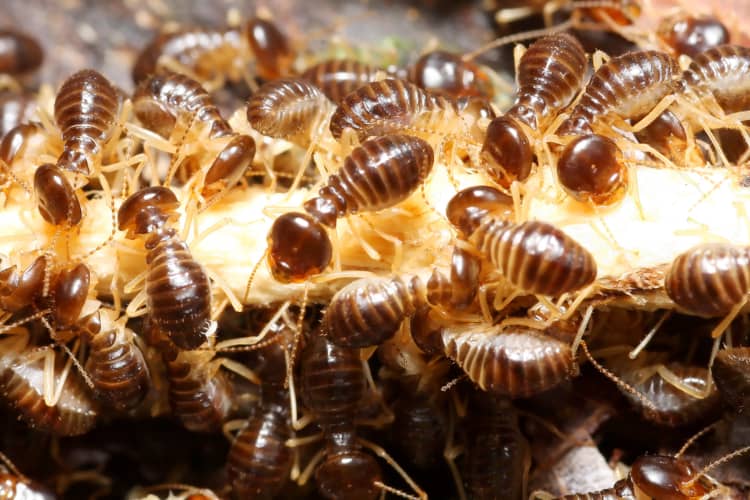 We have extensive experience dealing with termite colonies, so if you believe your home or property has been invaded by termites, call Pure Pest today, and we’ll help you resolve the matter quickly— time is of the essence when it comes to termites because you want to make sure you’ve eradicated the problem before it can cause any substantial and costly damage. Termites are great at finding their way in: they can enter your home through a crack as tiny as 1/32 of an inch.

Our professional team inspects and treats the termites to ensure that they find their way out before they can do any damage and with as little inconvenience to you as possible.

Pure Pest is a Certified Sentricon Specialist™. Using scientific information about termite behavior, the Sentricon® system ends the food chain needed by the queen and her colony for survival. With the proven power to wipe out future house-hungry termite generations, Sentricon gives you complete termite protection.

After a Certified Sentricon Specialist™ inspects your property, stations are placed around your home. Utilizing Always Active™ technology, the Recruit® HD bait is immediately available. In-ground stations have a visible service cover only opened by a special key.

Preferring the bait nearly 10 times more than wood, worker termites discover and quickly share their find within the colony. Once ingested, the active ingredient in Sentricon, noviflumuron, prevents termites from maturing through molting.

Unable to molt, termites die. And when the colony dies, the queen isn’t too far behind. Like a captain going down with the ship, despite the resolve to survive, there’s just no hope.

Imagine worry-free, 24/7 protection now and well into the future. All it takes is your original bait stations and ongoing service from a Certified Sentricon Specialist. For what it’s worth, termites prefer you opt out of this offering.

Termites at a Glance 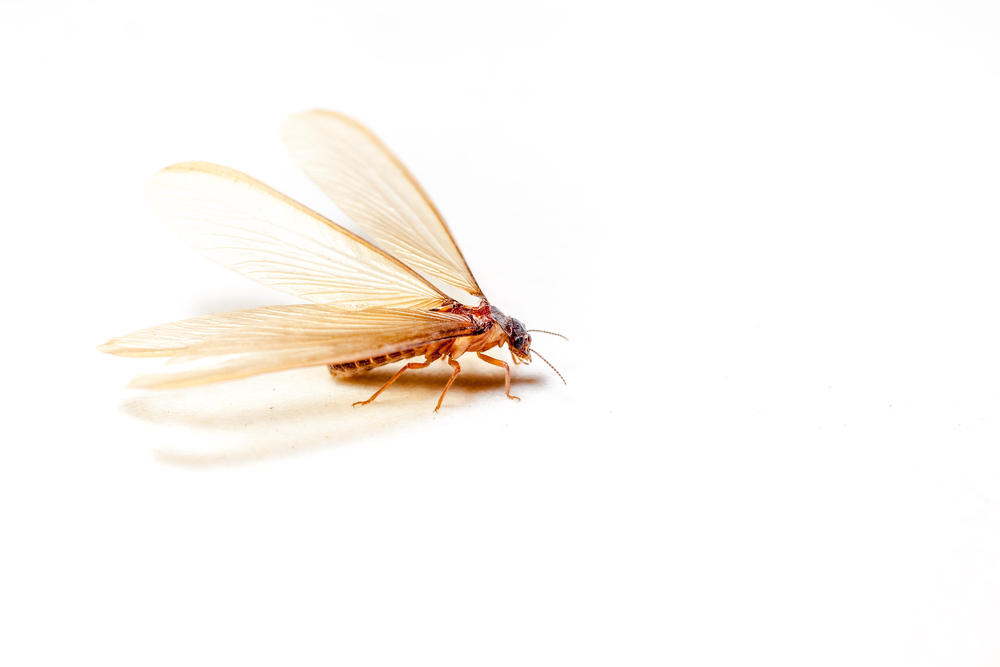 Termites are about 1/8th of a inch long and live in underground colonies that can contain up to 2 million individuals. Termite larvae are grown in the colony and go through several molts while they develop into their caste type. Workers live a couple of years, but queens can live 15 or more.

How to Get Rid of Termites

Do not go near them or try to disturb their nest. They will move their nest into another secret area and likely cause more damage.

Because of the proximity of humans to the infested areas, extra care must be taken to avoid any toxicity or allergies developing due to termite control treatments. Some methods to get rid of termites include:

The treatment is put around the building and in the bottom floor where the colony is likely near.

Stations used to bait termites. These should be checked frequently for follow-up.

Depending on the circumstances, it may be needed to remove wood in contact with soil or improve ventilation in these high-risk locations.

Call Pure Pest today—we will get rid of your termite infestation with safe and minimal use of chemicals.

If you cannot spot termites, it does not mean they are not there within the building. If you suspect an infestation, you should immediately contact the termite control experts at Pure Pest. We can inspect your property and implement a plan to eradicate these nasty pests, thereby preventing further damage to your home or commercial building.