Where are All the Ants in Winter Months? 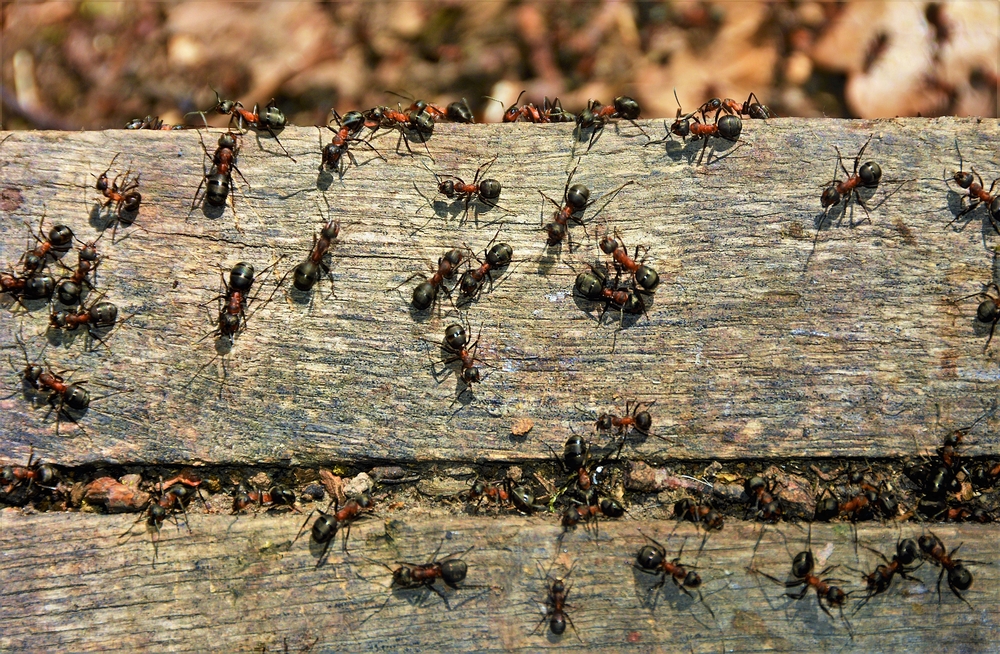 In hot summer months in warmer climates, and even though the spring and some of the fall, ants are often as ubiquitous as blades of grass. You may see them marching happily along in your garden, swarming around the tasty rotting flesh of a hornet or spider, or even lost in your leg hair or the fiber of your socks during an evening picnic. You may even need to call an ant exterminator to deal with them!

This disparity leads many to believe that ants simply die off in the cold because their bodies cannot handle the temperature change. This view gets right the impact that the winter could have on the bodies of ants, but it is not true. After all, if ants all just died off in the winter, how would they reproduce and appear again in your gardens and picnics when the weather warms up again?

How, then, do ants make it through the harsh winter months? Do they hibernate like bears and other mammals? That’s not quite right either, although it is closer to the truth. Rather than hibernating, ants tend to retreat into their nests beneath the soil and transition into a state called diapause. In this state, ants aren’t sleeping, but they also aren’t doing much else – often not even eating or drinking for an entire winter. Ants transition into diapause so that they can conserve energy and stay warm beneath the earth’s surface while there isn’t much food available to them and the cold temperatures threaten their health.

How do ants prepare for winter?

Ants cannot simply transition into diapause when it starts to get cold without preparing for this long period of laziness. This preparation is based mainly around changes in diet. While ants usually prefer to eat food rich in nutrients and protein such as seeds and dead insects, when it starts getting towards the winter months, ants will start eating more carbohydrate-rich foods. Ants are actually intentionally getting fat when they start eating more carbs and sugar. When these types of foods become fat, ants are able to stay a bit warmer in the winter because of the additional fat on their body, and they use the energy stored in the fat to get through long winter periods of not eating.

Even more impressively, certain species of ants can convert carbohydrates into not just fat, but their own special version of antifreeze! These ants are able to produce within their body a certain alcohol known as glycerol, which is actually found in most brands of antifreeze that you might use for your car engine. This natural antifreeze allows ants to control their body temperature and stop their internal organs from becoming frozen.

Where do they ride out the cold?

As noted previously, many species of ants like to retreat underground, often spending the winter in nests that were already built and can shelter entire colonies of ants through the warm winter months. However, not all ants have nests available to them, and some seem to prefer other means of shelter.

One popular hiding place is under and around rocks, which tend to store heat from the sun and can help ants stay warm throughout the winter. Other ants will cluster together in piles of rotting leaves, or under large chunks of tree bark.

Most concerningly to humans, many ants seem to consider the ideal hiding place to be heated homes and other human-made structures. Although it is understandable that ants want to go inside where it’s warm in the winter, much like we do, this is not as ideal a situation for humans as it is for ants, for obvious reasons. No one wants massive ant infestations in their home, no matter how cold it is outside. In order to prevent ants coming into your home, you should be sure to seal any cracks or gaps on the outside of your home when the winter approaches.

What happens when winter ends?

Ants are very sensitive to temperature changes, and they can tell when the environment has warmed up enough for them to resume their usual activities. Ants tend to immediately go out searching for food as soon as the temperature is warm enough, and they will often be the most active during this time of year, as they emerge from their hiding places and communicate with each other in order to get enough food for their colony and get back into the swing of things.

You may think that this would be the time that ants would leave your house if you have an infestation, but that’s not usually the case. They will likely be interested in any food scraps or other nutrient sources they can find in your home. In fact, you may not even know you have an ant problem until winter ends, because they may be simply huddling together in your walls or floorboards throughout the winter, only to emerge en masse when spring comes. If you begin to notice an ant infestation in early spring, it’s probably a problem that started a while ago but was indetectable while the ants were in diapause throughout the winter.

If you do discover that you have an ant infestation, whether it’s during the winter or when they emerge from their lairs as the temperatures warm, don’t despair! Ant infestations can be one of the most complicated and frustrating issues to have in your home or business, but the professionals at Pure Pest have many decades of experience dealing with a wide variety of ant species. No matter how severe your ant problem is, or no matter what type of ants you are dealing with, Pure Pest will be able to use their experience and expertise to help you get rid of the ants in your home once and for all.