Brown Recluse is the New Black 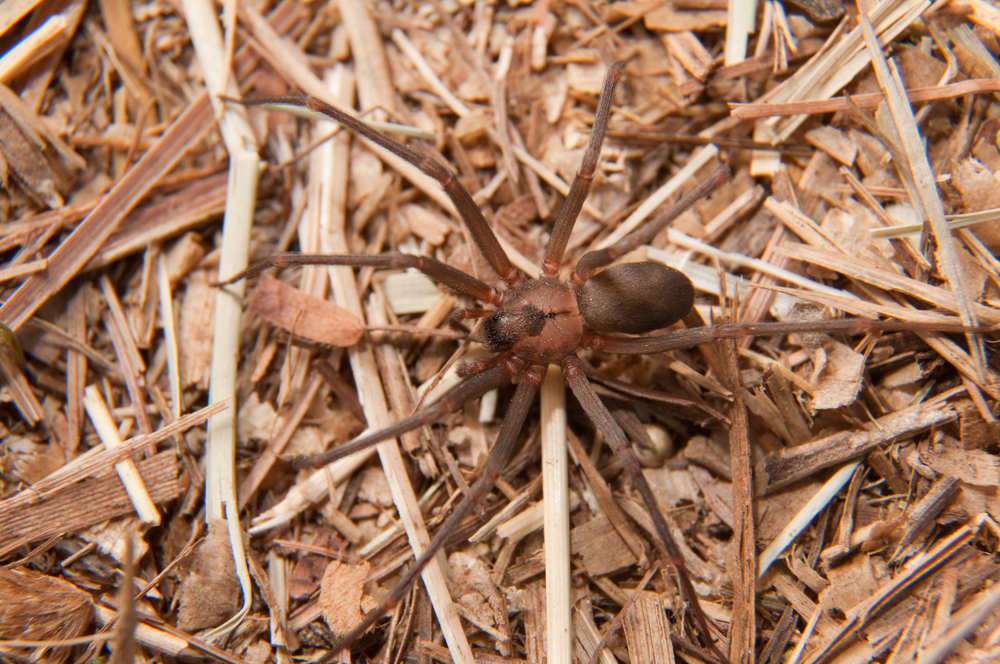 Brown is the new black, arachnologically speaking. While the Black Widow spider get the limelight and superhero monikers, the Brown Recluse quietly possesses venom more potent than a rattlesnake. It possesses a necrotic venom that can cause cells to rupture and die, setting off a chain-reaction immune response that can continue to grow unless surgically removed. While instances of Brown Recluse bites are statistically rare, it is important to know how to identify the spider and take precautionary steps in order to prevent bodily harm. This article will detail the identifying characteristics, life cycle, and habitat of the Brown Recluse spider. The best way to deal with a spider infestation is to prevent it in the first place. Talk to Pure Pest today about setting up a recurring pest treatment plan.

The most surefire way to identify a Brown Recluse is to examine the eyes. Different from other spiders, they have 3 pairs of eyes as opposed to 4. The eyes are arranged in pairs, making it appear that the spider has 3 eyes. This identification trick does require proximity to the spider, which is not recommended. Other physical characteristics include the spider’s size, which is generally slightly larger than a penny. Recluses are uniformly colored, meaning that any spider with bands on its legs or multiple colors on the abdomen is not a brown recluse.

Much has been said about the “violin” marking on the abdomen of the Brown Recluse, and indeed, this is a distinctive characteristic. This feature is often visible as a darker marking on the spider’s abdomen shaped like a violin and pointing towards the rear of the spider. The issue with this marking is that other spiders possess it too, most notably the cellar and pirate spider. It can also be deceptively easy to either miss or mischaracterize, so for this reason entomologists point to the eyes as the most accurate identifying characteristic.

Brown Recluses are often mistaken for other spiders. Here are some other characteristics to help narrow down the identification possibilities

Brown Recluse spiders generally live 2-4 years. Life for a Brown Recluse spider begins when hatched from an egg sac, which females produce in the summertime. Young Brown Recluses are born with about 50 siblings, for which it takes about a year to reach maturity. During this period, they molt (shed their skins) around 5 times until they reach full size.

Brown Recluses are nocturnal. They hunt at night and return to their retreats during the day. Brown Recluses use webbing only for shelter; they hunt by chasing down their prey. Generally, they eat other insects, often crickets, flies, moths, etc. They have been known to eat other Recluses when times are lean, though they prefer easier prey. In the daytime hours, Recluses hide in retreats to rest, often in crevasses and other dark, out-of-the-way areas. Females are more likely to stay close to their retreats while males can wander further, eventually returning as morning rolls around.

Brown Recluses, like their name suggests, are not aggressive spiders. They do not want to eat you. However, they bite when they feel like they have no other option. This most often happens when trapped in clothing or pressed against a body in another way. Because of their small fangs, victims often don’t feel the bite until reddening or swelling hours later.

Most Brown Recluse bites heal on their own and don’t cause major medical issues. Bites can become inflamed and tender, but usually heal in a matter of weeks. However, because Recluses possess necrotic venom, they can cause necrotic lesions. On a cellular level, the venom causes cells to burst, spilling their contents that had previously been contained within their cell walls. The immune system then identifies this problematic breakage and attempts to eliminate it with the heavy weaponry in its arsenal. This, in turn, can cause collateral damage to other cells, prolonging the cycle.

In other rare instances, wider systemic effects take place when venom enters the bloodstream. This can result in fever, dizziness, vomiting, and other symptoms. This most often happens in children, older adults, and others with weakened immune systems.

Brown Recluse spiders are notoriously hardy. They can survive periods of extreme heat, cold, and drought. Like many other spiders, they are well-suited to human dwellings and often take up residence in sheltered, tucked away places in homes. For this reason, Recluse infestations are relatively common. Because of their affinity for dark, protected areas, identifying Recluse infestations can be relatively difficult. They especially like sheds, crawl spaces, attics, basements, closets, and other similar spaces.

Generally, the two best ways of preventing infestation include reducing habitable spaces and detecting infestations early. Generally, the more dark secluded space, the more likely Recluses will take up residence. Reducing disorganized, cluttered areas can cut down the possibility that Recluses make their home in the recesses of an attic or garage. Be careful when doing this work and wear long sleeves to minimize the chance of Recluse bites.

Detection takes the form of routinely putting out traps and surveying them for Recluses. Glue traps, often used for other pests, will also catch Recluses. They’re available at most home improvement and hardware stores. Set these up around the house, especially cluttered, infrequently visited areas where spiders generally live.

If you do trap what looks to be a Recluse or for another reason believe you have an infestation, turn to professionals to take care of the job. Pure Pest has been doing this work since 1954 and is a trusted pest control name. Recurring treatment plans are the most useful in preventing infestations, as they include monitoring and re-treatment if necessary. With multiple plans and price points to choose from, you can choose what works best for your home, your family, and your budget. We offer our 100% Pure Promise guarantee that we’ll do the job right, or we’ll come back and re-treat for free.