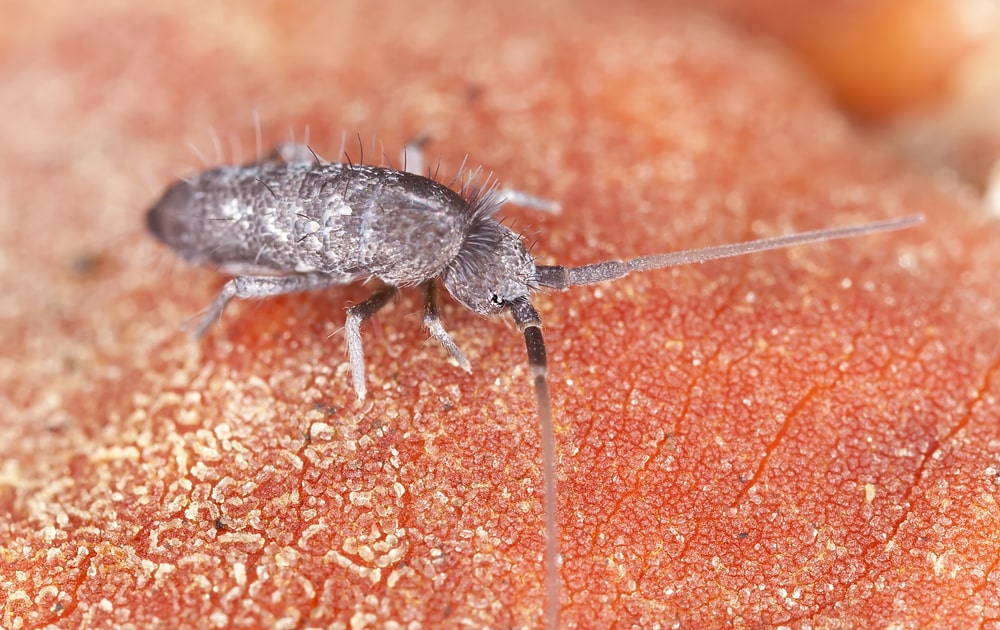 Winter is a time to kick back and relax. The snow is falling, your home is cozy, and you know you don’t have to worry about warm weather pests till next spring. Right? Wrong! Certain groups of insects can survive in the bitter cold like a certain insect known as the Springtail, or more commonly known as the Snow Flea. While most Springtails can’t survive the winter, there is a certain subsect that can, and they and their spring-loving counterparts can survive well into the other seasons and cause problems that most homeowners would rather avoid. In this article, we will detail everything you need to know about Springtails and just how to get rid of them for good.

What are Springtails? How Do I Identify Them?

Although they’re called Snow Fleas, they aren’t fleas at all despite how often they’re mistaken for them. Springtails are small, jumping insects no more than 1/16 inch long which is about the size of a mustard seed. They have an oblong, segmented shape with six legs and a black or gray coloration. They are extremely hard to see, except on freshly fallen snow where they will look like pepper flakes, aiding the flea-insect confusion.

The name Springtail is derived from the ability to leap long distances when disturbed. They have a tail-like appendage called the furcula that, when threatened, can hit the ground with enough velocity to spring them into the air. They travel in groups, and thus if you disturb one you disturb them all, and soon you’ll have a jumping mess to deal with. This jumping ability is another reason they’re mistaken for fleas.

They, like most insects, have three stages of life; the egg stage, the nymph stage, and the adult stage. They reproduce rapidly, developing from an egg to an adult in just a few weeks. Their life cycle starts when the male lays out packets of sperm cells, which the female picks up and uses to fertilize her eggs. The eggs are usually laid in batches or singled out, most likely near organic matter and/or areas of heavy moisture. The nymph stage resembles the adult, and they go through a series of molts before they reach full-grown size.

This quick life cycle can be very unfortunate for any human parties involved as rapid reproduction can be a pain for those wanting to keep them out of their house. They breed like rabbits and to make matters worse the eggs typically hatch within ten days of fertilization with warmer temperatures leading to shorter incubation periods. They live anywhere where there isn’t extreme heat or cold, and considering a single female can lay up to 400 eggs in her lifetime and the short development period they can be anywhere at any time. It’s almost scary where these little insects can wind up.

Where can you find them?

Springtails love two things: moisture and organic matter. Springtails are commonly found in moist or damp areas, like under decaying logs, leaves, damp soil, or mud. They feed on mold, algae, bacteria, insect feces, fungi, mildew, lichen, and organic debris. Because of their diets, they tend to hang out in damp areas where their food thrives. In fact, if you overturn the compost in your yard or an old log you may notice a few living there. Mushrooms, stream banks, wet grass, anywhere their is moisture you can find these little critters.

However, their moisture-loving nature isn’t good when that area is your pool or bathroom sink. Springtails can enter your home through your pipes, ventilation, windows, or any other space they can fit through. Springtails tend to invade homes seeking moisture, so when the summer sun dries up their resources, they tend to move where they’re not wanted. Damp basements, a leaky bathroom, and even your kitchen can be home to these pests, and when they gather in swarms well, it can be a bit disconcerting to say the least.

Well, yes and no. Let me explain. Springtails aren’t fleas, so they don’t bite humans. They don’t pose any risk to you or your pets as they don’t carry disease.

However, if they get into your house they can die out quickly or continue to thrive, so either you got a mound of dead insects or a mound of live ones, and either one isn’t something you want to wake up to see. They can also jump into your pools and you’ll have floating patches of dead

Springtails which, while easy to remove, are unsightly. They can eat plants and while a swarm may kill a baby plant, most plants withstand them fairly well without taking preventative measures. It is generally advised to call pest-control specialists as they can be hard to control and the process of removal is best left to the professionals.

How to get rid of them

Springtails are a part of nature, which also means they’re irritating when they’re in our house. Traveling in swarms, jumping when scared, lurking wherever moisture is, they can be a real pain to deal with. Even though they’re harmless, nobody wants to deal with insects, especially jumping hoards of insects, so it’s best to leave it up to a pest control company of professionals, specifically Pure Pest.

Pure Pest has mastered the art of not only getting rid of Springtails, but a wide arrange of other pests like fleas, ants and much more. By getting ahold of their certified technicians, you can set up an appointment for Pure Pest to come in, kill the Springtails, and help prevent them in the future.

With this you can ensure peace of mind knowing your home’s rid of the pesky insects and protected with the best of care. A good defense is a good offense after all, so it’s better to call the experts and have them take care of it now, so you can go back to enjoying that winter holiday break.