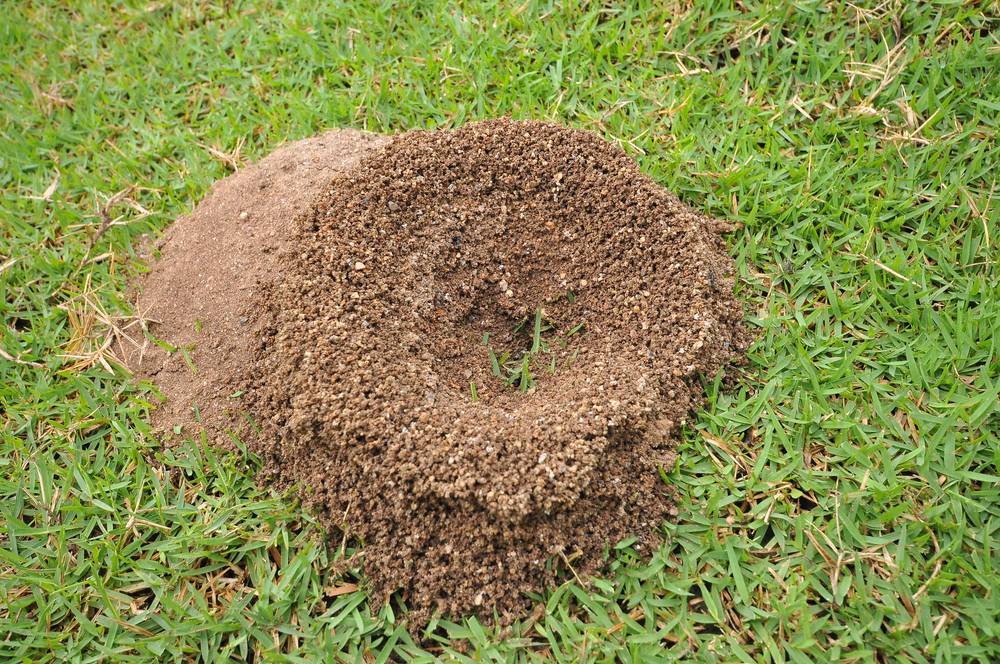 So imagine you’re walking along your driveway or in your backyard, and then you see it. An ant hill. It may seem tiny, but it can actually be a huge problem.

A few types of ants that tend to build elaborate and big mounds are harvester ants, pyramid ants, Argentine ants, Allegheny mound ants, Texas leafcutter ants, and red imported fire ants. And while the hills can seem small on the outside, they aren’t so small underground and are often quite complex. Ants tend to make hills to keep their queen and their larvae safe. They also build them to defend themselves from predators, to use as an entrance to the below-ground nest; and to help control the nest’s internal temperature.

What Do Ant Hills Mean for Your Property?

So you see an ant hill – what’s so wrong with that? Why are they a problem? I’m sure the thought has crossed your mind: if you leave them alone that they will leave you alone. Unfortunately, that’s not exactly how it works.

Ants don’t particularly care about how you feel – if they think you are threatening them or a danger, they will bite/sting you. And depending on the ant, the pain of the bites/stings can range from mild to excruciating (like the bite of the bullet ant, which feels like getting shot by a gun). And in some very rare cases, the bite or sting of an ant (such as the fire ant) can cause an allergic reaction – that is, anaphylactic shock, which will result in a very fast trip to the ER (and hopefully won’t result in death).

But besides the bites and stings of ants, they can cause other problems too. They can damage landscape grasses and ground cover, and reduce the beauty of your property because of how ugly they are. Not to mention that infestations of ants are troublesome, and prevent you from moving outside objects because of how many there are. And depending on the type of ant, they can reproduce and grow into other colonies very quickly. One or two mounds can quickly turn into 20 if you ignore the problem.

The DIY Approach to Ant Hills

Can you get rid of ant hills on your own? You can, technically, but some of these homemade remedies or mass-produced remedies can range from useless to dangerous. A lot of people will use cleaning products to get rid of ants, using items such as vinegar, essential oils, or dish detergent in a homemade mix. Some people have tried spraying the nests with premixed cleaners, such as Lysol.

Others bait ants, putting out objects that look tasty but are actually harmful. Examples of these are mixtures of boric acid and jam, borax (like the cleaner) and confectioner’s sugar, etc. Those aren’t good because boric acid (which is also what borax is made from) can be very harmful to the human body.

And some people will decide to destroy the nests of ants. Some ways of doing that is mixing dish detergent with boiling water (and pouring it on the ant nest), making a strong salt solution (mixing water and salt) and pouring it on the nest, or pour lots of cider vinegar onto the nest. But each of these can also have its own problems. Boiling water is dangerous because it can cause serious burns, and because ant nests are often built to be structurally sound and to withstand heavy rain, often the hot water will roll-off or splash on you if it isn’t directly poured down the entrance. And all three of those options cause serious damage to the ground and plant life around the nest, so they aren’t exactly ideal for someone who wants to get rid of ant hills because they are ugly. And other people – though it is VERY dangerous – will set ant hills on fire using gasoline or kerosene. Please do not do this – it is very dangerous, both to your yard AND to you.

You can also use insecticides to get rid of ants, a lot of stores sell them (brands like Reclaim IT, Bifen LP, Suspend SC, Bug Stop, etc.), but they are often dangerous to your health, your household, and your yard. And they’re time-consuming, because it can take a while for the ants to bring back enough of the poison to kill the whole mound (which is another reason they say to spread it out). They’re dangerous to pets, too, and for people with dogs, it’s difficult to keep the dog somewhere else or let the dog go somewhere else so it doesn’t go into the backyard and eat some of the poisonous granules. And if you misread the instructions for insecticides…it can get very ugly very quickly. Best that you don’t take that route unless you have too (we recommend not even doing it even if your infestation is severe – it’s too dangerous to you and your yard).

Some people advise raking out the mound, to send a message to the ants that the area where they built their mound is unsafe. However, this puts you in danger from the ants, as the whole mound will swarm the ‘attacker’. Also, you’ll be playing the long game – it’ll take more then a few rakings to get the ants to understand that the area is PERMANENTLY unsafe. Please don’t run the mound over with your lawn mower, either. That’s a nice way to get your lawn mower infested with ants and get several nice bites that can take several days to stop hurting.

How Should You Handle Ant Hills?

We recommend getting a professional ant exterimantor out to get rid of the mounds. We know how to do it safely, in a manner that won’t hurt you, your family, your pets, or your yard.

Moral of the story? If you see a bunch of ant hills on your property, it’s probably time to get them taken care of to prevent injury to you or your household. Give us a call! We’re happy to help!